On Buzzsumo, a website that aggregates viral content, I looked up articles that include the term “millennials.” Much of the rhetoric I have perceived towards millennials paints them as lazy, entitled snowflakes, whether that rhetoric comes from false or factual sources. So I thought an article about the generation born between the late 70’s and mid 90’s would provoke more emotions than rational thought.

The first query that my search returned was a Mic.com article with the headline “Here’s what the Electoral College map would look like if only millennials voted.” Right away I knew what the map looked like, because this was a map I remember sharing on Tumblr before the 2016 election. Nearly all of America was blue, with a few red states in the midwest. I opened the article. Yep. There it was. 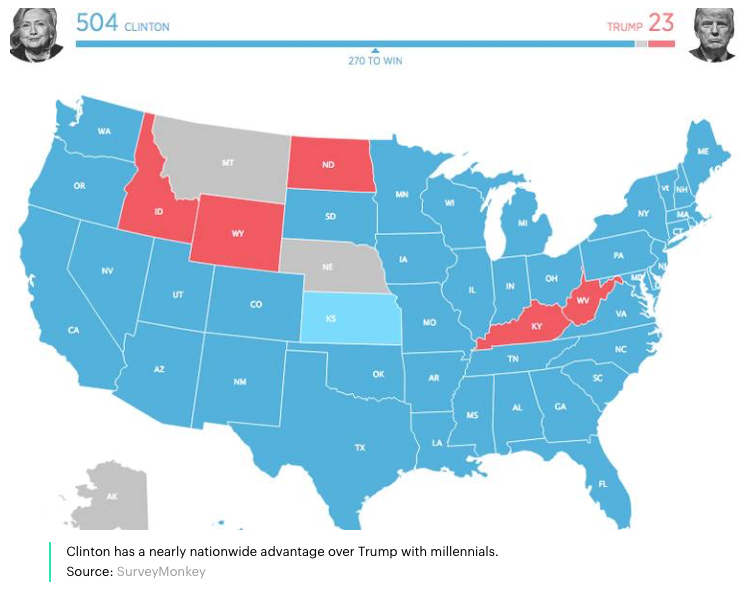 Here were my thoughts when I saw this: “When I shared this a year ago, did I check the source? Or did I do that horrible thing: share it with an emotional conviction that this feels right, so it must be true?

“If this is a fake map, I’m going to have some serious scrolling and deleting to do on Tumblr, the blogging website I haven’t been on in months for lack of time or interest and abundance of cringing.”

I was not familiar with Mic.com. “Is it a reputable, albeit niche new media site?” I asked myself.

To find out, I check their “About” page. I scrolled down, and saw testimonials about Mic.com from Hollywood Reporter, Forbes and The New York Times, all known reputable media sources.

“Mic is a news site aimed at the highly coveted millennials, who are increasingly looking online for fresh takes on relevant issues. Among other topics, the site covers world news, policy, technology and science.”

To find out if it was real, I highlighted and right-clicked on that sentence to Google it – with quotes already around it – but nothing returned the search that corroborated that statement, only a Forbes article about recent employee layoffs at Mic.com, and the source was Mic.com’s about page.

I went back to look at the electoral map article. In the second paragraph was this:

A Mic sneak peek at a new interactive map from Survey Monkey, which goes public at 9 a.m. Tuesday, shows Democrat Hillary Clinton ahead not just overall in Electoral College projections, but with an overwhelming advantage among millennial voters.

There were two hyperlinks that should have gone upstream to original sources. However, the “map” link went to the 2016 exit poll – definitely not just millennials who cast votes in that election – and the “SurveyMonkey” link led to the SurveyMonkey.com homepage. Neither of these were sources.

I went back to the exit poll and found a pull down menu with specific demographics, and millennials were one of the options. I opened that and found this map:

…It was not exactly the same map that went viral. The viral map had Clinton at 504 electoral votes and Trump at 23. This map had them at 496 versus 39. However, the trend was the same: Clinton had the vast majority of millennial votes.

As that paragraph in the Mic.com article said, the map they shared was a sneak preview of the map that would go live “at 9 am Tuesday,” so at the time SurveyMonkey was probably still collecting votes that would change the results.

This Mic.com article was probably truthful at the time, and the idea that Trump trailed far behind Clinton in millennial votes was proven factual. However, a survey is just a sampling of a population. Under the map, SurveyMonkey wrote it interviewed about a million registered voters during the campaign, so not everyone was included.

The good news is this viral article was truthful. Although, like all statistics, the data are slightly misleading. At least I don’t have to go back and delete this map off my Tumblr.